Simthandile is extremely passionate about what she does 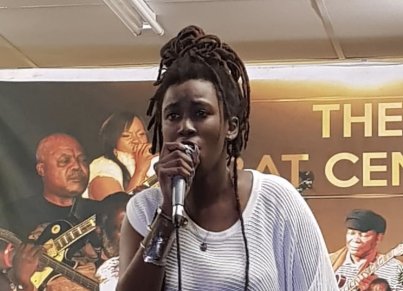 “I regard myself as a nurturer of the arts. I’m probably recognized as a singer. People seem to respond very positively to my voice. My voice has awarded me with most of what I have, so we can make that an answer if I need to be put into a box.  This is how Durban born jazz musician, visual artist and entrepreneur Simthandile Mtolo introduced her to Jazz It Out about her amazing journey as an artist”

The 31-year-old mother to daughter Lee was born in Newlands East where she still lives. Her interest in arts began when she was doing Grade 11 at Kingsway High in Amanzimtoti where she landed her first role in the musical “Oliver” directed by the late Themi Venturas, staged at Elizabeth Sneddon Theatre in 2004. Her acting did not end there. She also played roles in productions such as My Fair Lady in 2009 which was staged at The Playhouse, “Man Of La Mancha” in 2010 which was staged at Grahamstown Arts Festival Main Stage, and more recently in “Mashu The Musical” which was staged at The Playhouse in 2015.

Simthandile always comes across as a workaholic who enjoys what she does and gets fulfilment from it. “When I was growing up, I was told that a child doesn’t sit around and do nothing. As a person, you need to be alert of your surroundings, and you need to know what needs to be done without being told what to do”, she tells Jazz It Out. Coming from a family that loved music, she slowly found her own voice in ballads, jazz and soul music.

In 2006, she enrolled at the University of KwaZulu-Natal as a music student but dropped out the following year, a decision that did not go well with her mom. To this day, she insists that: “I wanted to do what I wanted to do and how I wanted to do it. And I was not going to have it any other way”. This was not the first time in her life to lose interest in something. She adds that: “I started modelling and playing guitar in Manor Gardens Primary when I was 6, but lost interest”. 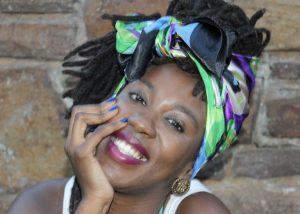 One of the main reasons for dropping out of UKZN was to pursue a more “practical career” which she felt would allow her to include all her interests without limitation, simultaneously creating new opportunities that could aid in molding the local creative industry from where it was, to where she hoped and still works towards taking it to. These days, she is known as a producer, director, lyricist and composer. She tells Jazz It Out that: “I write pretty well but seldom share my work”.

Throughout the years, Simthandile performed as a musician on small, corporate and festival stages. She was a part of the FIFA World Cup fan parks in 2010, Hazelmere Dam Jazz Festival, performed as several clubs throughout the country and continent, as well as a multitude of private events. In 2015, she was awarded the 1st prize for East Coast Radio’s “Be The Band Competition” where she won a R50 000 music hamper for, as well as the chance to perform at BP Durban Day where shared a stage with several artists including Thadiswa Mazwai.

When asked to describe her music, she didn’t hesitate to say that: “I sing about love and my personal experiences in love”. She also sings about things that matter to her, like the lack of love amongst women, the denial of responsibility among men. “But I’m not harsh about it”, she added. “I say things that need to be said, because what better way to say those things than through a song”, emphasizing what her music is all about.

Simthandile also loves jamming. “Jamming is the most natural way of being an artist”, she said. Zoe The Seed is a very close friend of hers and they regularly do jams. “Zoe and I have become family through music”. Her best jamming moment though was with US saxophonist Ernest Dawkins when he pulled her on stage at the Durban jazz club The Chairman a few years ago. Jazz It Out has been priviledged to witness a few of Simthandile’s performances and she always come across as an outstanding performer. 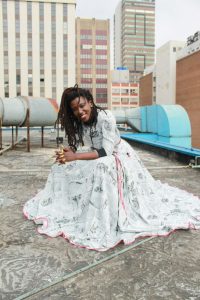 Gregory Porter is one of the artists she draws inspiration from. Her other influence comes from Simphiwe Dana, Esperanza Spaldings, Zoe Modiga, Robert Glasper and always dreams of sharing the stage with Gretchen Parlato and Lauren Desberg. She didn’t want to divulge much on the debut album she is working on but promised to invite Jazz It Out to the studio for a sneak peek. Simthandile is a perfectionist who wants everything required for the album to be there before it hits the shelves.

She is also an aspiring entrepreneur. “Ebonygypsy” is a business that she owns which generally creates productions that merge multiple disciplines to provide working opportunities for the magnitude of authentic artists from KwaZulu-Natal. These productions and concepts offer entertainment for the general public through shopping centre entertainment, as well as shows in various venues.

Events “Township Jazz Society” is one of her successful shows which tour KZN townships while featuring undiluted jazz band line-up. Another exciting production that has done well over the years is “A Woman, A Hat, And Her Belly”, which is an annual women’s celebratory show. This show merges dance, music, poetry and the pregnant ladies that are invited to be part of the performance. Simthandile firmly believes in creating something out of nothing.

When asked what she does with her spare time, Simthandile chuckled and said, “Is there really something called spare time? I believe that everything under the sun has it’s time”. She believes there’s time to work, and a time to spend with those that make life worth living, like her daughter Lee, her partner, family and friends. “You can do so many different things with those people. There are too many things to do in the world for us to call it “things to do in the spare time”. Every minute counts”, she added. She clearly knows what she wants from life.

Topping the list of hobbies outside what she does for a living is a good conversation. “I enjoy getting my mind picked. I enjoy raw wisdom and intelligence, as well as experience”, nearly concluding the chat with Jazz It Out. Simthandile is also a good swimmer who enjoys a dip in the pool every now and again. “I prioritize my happiness so I follow my heart and accommodate my mood”, she said. This workaholic also enjoys supporting local art, she attends so many gigs and visits the gallery at least thrice a week. Her message to young women that want to be like Simthandile is – “God can’t put you here to be someone you aren’t. Find yourself. Don’t follow. Don’t copy. Be true to yourself”.

See our gig guide for Simthandile’s next live performances. She has a Facebook Page a which is named after her. Her Twitter handle is @_Simthandile_ and on Instagram she is @simthandilemtolo. 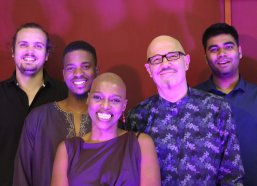 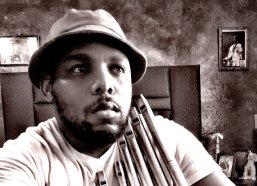 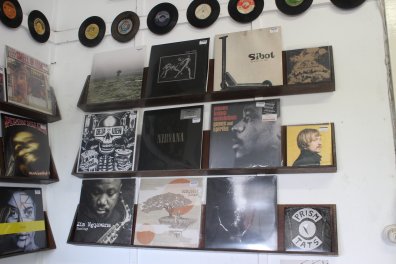 All the vinyl's you need are at Khaya Records

10 thoughts on “Simthandile is extremely passionate about what she does”