Riley became a drummer long before he knew it 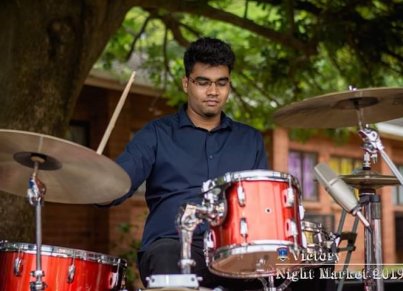 “At the tender age of 24, Riley Giandhari who is popularly known as Riley G has performed in so many festivals, appeared in several recordings, formed 4 different bands, received several accolades, teaches music and currently studying towards a Master’s degree in composition”

Probably being so close to his dad influenced Giandhari’s career as a musician.  “My dad is a Durban drummer.  He also comes from a musical family.  I guess it’s in the blood”, he tells Jazz It Out.  “I am told that at the age of 2, I would sit on my father’s lap while he was rehearsing with his fellow band members and play his drums”.  His father used to play drums at church.

While at high school in Queensburgh, he would watch a lot of music videos in his spare time.  Giandhari has very fond memories of those years in high school.  Besides enjoying what he learned in the classroom, he played chess, wrestling, spinning tops, marbles.  He also enjoyed swimming and drawing pictures.  Despite the fun he had with his schoolmates, his plans were unclear at the time.

In his final year at school, he applied to study at the University of KwaZulu-Natal. “Initially I wanted to study law or chemical engineering.  In the end, I ended up studying music”, he recalls. Despite being nervous yet excited, he knew it was the beginning of many opportunities but never anticipated it was going to be as exciting as it turned out to be. 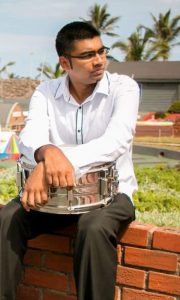 Riley G graduated with B A Music Degree from UKZN in 2016.  The following year he graduated with B A Honours in Music and is currently studying towards a Master’s degree in Jazz Composition.   Besides obtaining all the qualifications, he also grew as a musician. He was part of the Standard Bank Youth Jazz Bandthat performed at the Standard Bank Joy of Jazz Festival in 2016. Performing at the Joy of Jazz Festival was like a dream and a huge honour for Giandhari.  In the same year, he travelled with Nyimbo Ya Bantu where they performed at the Olso Jazz Festival in Norway. He felt like a South African ambassador and musician in Oslo.

His lecturer and pianist Sibusiso Mash Mashiloane asked him to be part of his team when he recorded his debut album entitled “Amanz’Olwandle”.  Riley played drums in the songs “Afro Blue”, “In My Heart” and “May 11″. In Mashiloane’s latest release entitled Closer to Home, Giandhari plays drums in the tune All Blues. When Mashiloane travelled to perform at the Cape Town International Festival last year, Giandhari was part of his Mash Trio at the event. He also performed with Mashiloane at the UNISA Jazz Festival that was in Pretoria.  Giandhari also became a finalist in SAMRO Overseas Scholarship for composers and won the best class composition

Some of the jazz artists that he has performed with include Swedish pianist Jan Lundgren, Durban vocalist and pianist Chloe Clark, US saxophonist Ernest Dawkins, British trombonist Raphael Clarkson, Durban vocalist Lu Dlamini and the late trumpet icon Hugh Masekela.  Giandhari recalls how nervous he was at the auditions for the National Youth Jazz Band. “The auditions were nerve-wrecking and I felt very uneasy after the audition”, with a laughter. “Later that evening I found out I had made it into the band.  I was really honoured to have been given the opportunity”, he told Jazz It Out. 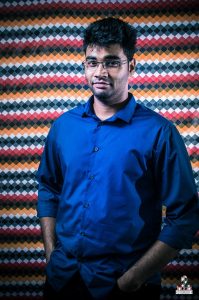 His future as a drummer looks very bring

When asked how he got to play piano in addition to drums, Giandhari said: “At varsity, every student must learn another instrument.  I had to learn the piano which is very useful when it comes to compositions”.  He said Mash is one of the South African pianists that inspired him to take more piano lessons.  “Working with Mashiloane if fun.  We always explore different concepts at rehearsals and gigs.  When we perform, the music always seems to have fresh sound”, he added.

As a session drummer, Giandhari gets to perform with different types of musicians who also have different expectations from him and always does his best not to disappoint. In that way, he appreciates all styles of music and he listens to any music he can find on a daily basis.  “Being versatile and having knowledge of the diverse music that exists helps me to adjust accordingly to what is being required”, making it look sound very easy and attainable.

The groups he has formed include The Riley G Collective, The Riley G Jazz and Pop Ensemble, The Riley G Big Band, The Riley G Trio, and other jazz trios and 4 to 7-piece party bands.  He says belonging to these different groups is very useful for his studies towards the Masters degree.  Giandhari is definitely one of the most sought-after drummers in KZN and beyond the province.

He delves deeper into what his Master’s degree entails.  “As the degree is about music compositions, I am referencing some of the music greats such as Chick Corea, Charles Mingus and Antonio Sanchez”, he told Jazz It Out.  He will also be composing and arranging 24 pieces for the masters project in order to find out who he is as a composer.  “I have also formed 4 bands to perform and record my music”, he added.

One of his concerns as a musician is the future of South African jazz.  “The future looks misty at the moment”, he said.  For South African jazz scene to be successful, Giandhari believes that jazz musicians, supporters and promoters can uplift each other as well as create more opportunities for one another.  As very good example is purchasing and marketing each other’s music to friends and families.

Even on days and nights when he is not performing, Giandhari is always easy to spot as a patron at gigs around Durban.  He states his reasons for attending gigs regularly.  Firstly, supporting live music is good for the soul.  Listening to live music somehow revives one’s approach as a musician and provokes the artist to think about music in different ways.

Secondly, one can learn a lot and acquire new information by listening to live music. Thirdly, as musicians, they should support brothers and sisters in the music industry.  “The music industry is not easy, especially being a Durban musician. Therefore, we have to support and uplift our fellow musicians”, he told Jazz It Out.

And there is also the perception that Durban based musicians don’t get the same exposure as their Gauteng based counterparts.  Giandhari believes that: “It is true to a certain extent.  There are more opportunities for work in Gauteng.  That is why Durban born musicians settle in Gauteng”.  He dreams of Durban being rich in the jazz culture and it’s deserving musicians being rewarded for their contribution to jazz.  “It will happen soon”, he said.

In conclusion, Giandhari has these words to learners that want to play and study music. “Always be yourself and stay true to the cause.  Never box yourself into any specific style of music.  Appreciate and learn all styles of music as there is more work for versatile musicians.  Be humble. Never think you made it as there is no end to music and the learning of music. Be touchable.  Learn as much as you can and show respect to other fellow students and artists”. 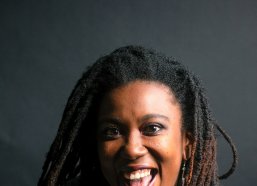 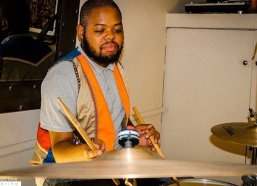 Ndumiso is a drummer not afraid of challenges 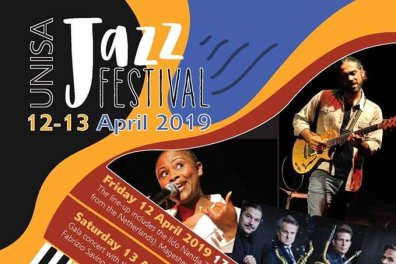