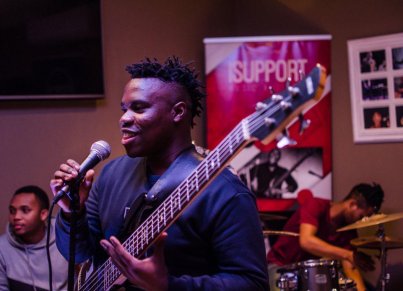 “Drums were my first love.  I used to play tins using them as drums.  At the age of  7, I started beating tins and drums creating rhythms.  Played a bit of piano and started to play bass and never looked back”.

Born in a small town of Dududu on the KwaZulu-Natal south coast 24 years ago, Nkululeko Freeman Gumede is a bass player, composer and bandleader.  He and his siblings attended church regularly where his mother also sang. Music has played a part in shaping who Gumede is today.  “I used to sing at primary school.  My siblings are also very much into music”, he told Jazz It Out.

His family moved to KwaMashu when he was 8 years old where they still live.  Gumede used to read the Bible and preach to his peers which was largely influenced by his mother who firmly believes in strong Christian values. As a young boy at school, he was not very interested in sport.  He played a bit of cricket and took part in athletics.  “I also played a bit of soccer.  I was a prefect in high school and also took interest in public speaking”, he added.

While doing matric, he wanted to study medicine but that did not happen.  He enrolled for a course in Information Technology (IT) while attending bass lessons on a part-time basis.  That’s where the love for the bass grew stronger.  Gumede learned to accept that he was a bass player.  In 2015, he enrolled to study music at the BAT Centre, which is Durban’s renowned multi arts centre giving him the confidence to audition at the University of KwaZulu-Natal the following year to enroll for a B Music Degree. 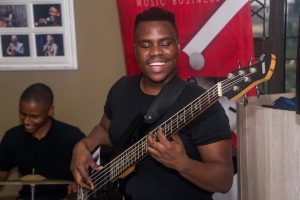 Gumede has established himself as a well-known bassist since enrolling at UKZN.  His knowledge of music has increased significantly and has grown in confidence.  The bassist who is also a very good vocalist has also learned to be versatile by performing with artists who sing gospel and afro pop to mentioned a few genres outside jazz.  “I never really focused on singing at first.  We had a band called Boys II Jesus which was emulated from the popular R&B group Boys II Men”, he recalls.

He added: “When I sang I received a positive response which was heartwarming and huge confidence booster.  Then I believed I could be a singer.  I also had to step out of the comfort zone”.  He also remembers a friend from high school who name is Bongumusa Masondo who had an elder brother by the name of Sabelo.  “I would listen to a recorder of Sabelo playing bass and got the impression that a bass player could be played”, with a chuckle.

Despite his mother’s reservations about Gumede’s decision to enroll for a music degree, she accepted her son’s choice and wished him luck.  “She is very supportive of what I do which I think is a huge blessing”, he added. Understanding different types of music genres comes in handy when Gumede works a session bassist.  Versatility is what keeps him relevant as an artist.  He knows the type of discipline required from him. 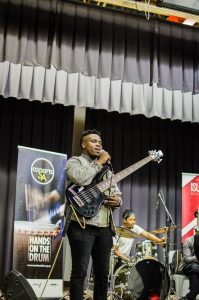 Interacting with the audience. Picture by Simanga Konstant Zondo

Some of the jazz musicians he has worked with include vocalist Judith Sephuma, pianist Sibusiso Mash Mashiloane, vocalist Zoe the Seed, saxophonist Khaya Mahlangu, pianist Andile Yenana, saxophonist Ernest Dawkins, and pianist Lindi Ngonelo. He also played with the late trumpet icon trumpeter Hugh Masekela the day he was awarded an honorary doctorate at UKZN.

The outspoken bassist has been part of the studio recording with gospel and afro soul musicians but is yet to be part of a jazz recording.  That may materialize sooner than anticipated. He also embarked on a tour with Black Crystals in 2017 which was funded by the Mobility Fund from Concerts SA.

Gumede also has his own jazz group called Freeman & The Free – Men. He is very passionate about his group which he describes as a movement than just a band.  “When I got into the music industry my dream has been seeing people being affected in one way or the other by what I do. I look at it as a ministry. My wish is to set people free through my music.  They must not be the same after I have performed my music for them”, he told Jazz It Out.

Performing at UKZN Centre for Jazz and Popular Music.   Video by Zamindlela Zama

He has huge ambitions for the future: “I see myself recording albums and performing internationally while running my company calledFreeman Entertainment which I registered recently”.  The bass player believes that jazz has a very bright future. “I believe that as jazz musicians we should allow the evolution to take place and work with it other without resisting it”, he said. By doing that, he believes jazz will go bigger and better.

The music genre also needs to be made popular.  He believes more jazz venues are required.  “We need more government supported jazz venues to keep the jazz culture going”, with an assertive tone.  Radio stations must also come to the party.  Gumede does not think it’s a brilliant idea to have jazz played only on Sundays.  “The genre is wrongly categorized as music liked only by old people which is not the case”, he added.

Gumede has no hesitation in his belief that the career in music is livable.  Despite arts being overlooked, people can make a living out of it. “I make a living out of this”, he told Jazz It Out.  He sums up his career thus far as having been life changing and inspiring.  Having been seen on television music shows like Afro Café, performed in festivals like Ugu Jazz Festival and Ekurhuleni Jazz Festival, he has all the reasons to be optimistic about the future. 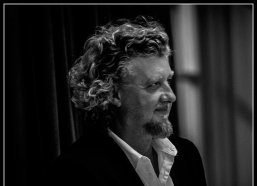 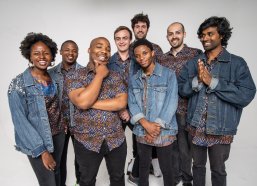 A group of young musicians united in cultural diversity 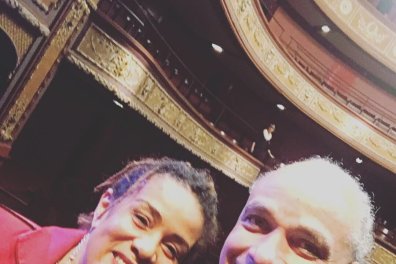