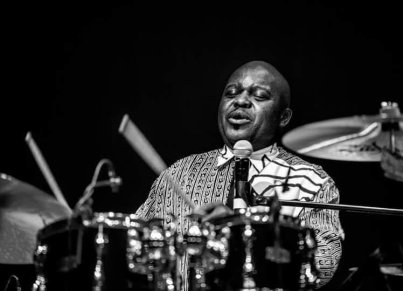 “His mother was very devastated when he dropped out of a junior degree in law and criminology just a month before completion at the University of Cape Town to face an uncertain future which he hoped would be centred around music.  One day while performing his duties as a supervisor at CCP records, he was overhead by the company’s CEO Irving Schlosberg singing along to the radio. Schlosberg advised the young Bernice to quit his job and study music”

Bernice Boikanyo grew up surrounded by musicians from within his own family, with uncles Phillip Boikanyo – a bass player and Dan Mabale – a drummer.  His uncle Phillip was the founder of the afro-crossover group that was popular in the 90’s called Kutu.  In addition to that, his maternal great grandfather was a trumpeter and choir leader, and his grandfather was a guitarist.  He would spend some of his time as a youngster watching traditional leaders beating drums and often joining them which he describes as an ‘early sign that he was going to be a healer through music one day’.

The 49-old-drummer was born in Naledi, Soweto and raised in Brits. Most of the Black schools only had three options for recreation which were soccer, athletics and choir singing.  Bernice chose choral singing and athletics.  “I was singing second tenor, alto, or tenor at times.  Athletics was my favourite sport and I still do a lot of jogging even today”, he told Jazz It Out.  Besides the extramural activities he enjoyed at school, he started collecting 5-litre tins of paint which he used as drums.  “People thought I was crazy”, he says with a chuckle.  His great grandmother would always come to his defence. 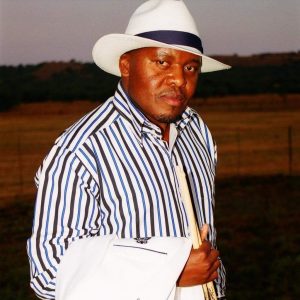 He also found a lot of inspiration from listening to guitarists Jonathan Butler’s “Lies” and George Benson’s “On Broadway”.  Bernice found the sound of the acoustic guitar quite fascinating.  “Butler excelled in vocals and playing the guitar”, he said.  Singing and playing the instrument was going to be something he would also be known for.  However, his mother did not want him to pursue music as a career and persuaded him to study for what was going to give him a secure job with all the benefits that come with it.  She wanted him to be an advocate one day.

Bernice headed to the University of Cape Town where he enrolled for a degree in law and criminology.  He did his very best to appease his mother even though he knew deep inside that all he wanted to do was to become a musician. In his final year with a month from completing his degree, he dropped out of the studies, a decision that left his mother highly devastated.  “Even though I knew we did not share the same vision as far as my future was concerned, I was hurt that she invested a lot of money towards my fees at UCT which went down the drain”, he said.

In 1993 he returned home, feeling like the whole world had turned its back on him.  Through a man he met in church, he got a job working in the distribution department of CCP – the local division of EMI music, a major record company.  “I was a supervisor at the inventory department.  My responsibilities included packing and stock control”, he told Jazz It Out.  While performing his duties, Bernice would sing along to the sounds of new CD’s and the radio.  Unbeknown to him, his singing would be overheard by his CEO Irving Schlosberg. 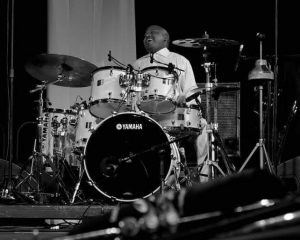 Doing what he loves. Picture by Robert Tlapu

Impressed with the talent Bernice possessed, Irving released his staff member and sent him to study music.  He describes his former CEO as an angel in disguise who gave him an opportunity no one ever did. Boikanyo recalls: “Schlosberg banished me from working at EMI records in 1995 to study what he saw as a move in the right direction and that happened after the recommendation I gave listening to Ringo Madlingozi’s demo from CCP records and they immediately signed him”.  Madlingozi would go to record many hits that made him very famous.

Boikanyo enrolled at CAMS, FUBA and FUNDA.  At CAMS, he studied under the tutelage of Morris Kubhela who was the founder of the traditional gospel outfit Winds of Change.  He was also taught by Langa Dube and Sibusiso Khosa who are now pastors as well as Innocent Modiba who was one of South Africa’s session vocalists that toured extensively with Miriam Makeba. “At FUBA, I was in the same class with Moses Taiwa Molelekwa under the tutelage of Rashid Lanie”, he said.  At the time, his focus was on mastering the piano.

It was at FUNDA where he felt he was at another level.  Bernice found himself in the company of Tlale Makhene, Thebe Motlhakeng, Mabeleng Moholo, Wendy Mseleku, Concord Nkabinde, Prince Kupi and many other ambitious students.  “Our tutors included Sibongile Khumalo, Mhlanganise Masoga, Motsumi Makhene and Vusi Khumalo”, he told Jazz It Out. He and Vusi Khumalo would form a special relationship which still exists to this day.  The mentor would positively influence the mentee in so many ways. 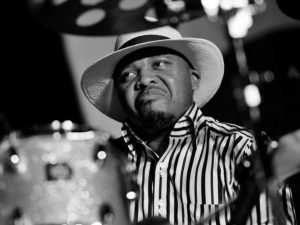 Drummers can also be bandleaders. Picture by Siphiwe Mhlambi

After studying piano for four years, one day he witnessed one of his part- time teachers Jabulani Dube playing drums which was a turning point for him.  He knew that drums were ‘his thing’.  Without hesitation, he shifted his focus to playing drums. Bernice does not however believe that piano lessons were a complete waste of time.  The piano is a very resourceful instrument when it comes to composing.  “Legendary drummer Jack de Johnette has a deep understanding of the keyboard because it helps in creating melodies which are so vital in composition and arrangement”, he said.

When Bernice requested Vusi Khumalo to give him extra drumming lessons, little did he know that their relationship was going to be like that of father and son.  Khumalo would always take him along to his gigs, insisting that music is not just about seating in the classroom.  He wanted the young Boikanyo to experience the direct impact of what it is like being a musician. Vusi introduced Bernice to musicians like Khaya Mahlangu, Victor Ntoni, Zim Ngqawana, Victor Masondo, Abigail Kubheka, Marah Louw and many others where he would boast about the bright future his mentee had in store.  “You will hear him one day”, he would tell them.

Through Khumalo, Boikanyo acknowledged that a drummer is not just a musician who sits in the background but can also be a bandleader citing the example of Khumalo’s album “Dusk to Dawn” which was released in 1995.  One of the incidents that Boikanyo will never forget in his entire career was when Vusi persuaded Gito Baloi to use the young an ‘inexperienced’ drummer at his gig that was at the Bassline in Melville. Baloi reluctantly agreed.  Vusi himself drove Bernice and his drumkit to the venue and just before the gig started, he told his mentee “now it’s the time for you to shine my son.  Show them what you got”.  That was the beginning of Boikanyo’s successful career. 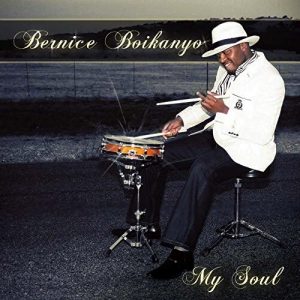 His debut album titled My Soul

He has since worked with musicians including Edmund “Ed” Thigpen, Roy Hargrove, Tutty Moreno, Pops Mohamed, Ringo Madlingozi, Jimmy Dludlu, Papa Wemba, Ken Philmore, Tlale Makhene, Prince Lengoasa and McCoy Mrubata.  After completing his music studies, he enrolled for a course in Business Music which equipped him to record his album independently from big record labels.  Although he dropped out of a degree in law and criminology, he now considers studying Entertainment Law which will help him and his associates curb misrepresentation and exploitation of entertainers which regrettably is still very rife in some sectors of the entertainment industry.

“Missing You” is a tune Bernice composed for McCoy Mrubata and was in “Brasskap Volume 1”. His rendition on his debut album features Percy Mbonani on saxophone.  Mrubata plays the saxophone in the tune “Mavusana” which is dedicated to the legendary Vusi Khumalo, his mentor. “Vusi was excited and honoured that I acknowledged the positive impact he had in my career and putting South African drummers on the map.  It was my way of thanking him”, he said.

There is a very interesting story about the opening track of the album “Shut Up and Listen”.  When they initially recorded the tune, they didn’t have a title for it. Listening to its melody, the late flautist Kelly Petlane said “people must just shut up and listen to you Bernice” and that’s how the title of the tune came.  While he acknowledges the contribution American artists have made to jazz, Bernice pays homage to those artists who insisted on playing South African jazz.  He mentions the likes of Makhaya Ntshoko, Sipho Gumede, and Winston Mankunku Ngozi.

The drummer with a positive attitude to what he does loves reading especially about entrepreneurship and enjoys exercising.  He is involved in old age homes in Soweto and Brits, an orphanage called Othandweni Children’s Home in Soweto and loves doing community work.  His Facebook Page is Bernice “GROOVE MASTER” Boikanyo Artist Page.  Follow him on Twitter @BerniceBoikanyo and @berniceboikanyo on Instagram.  Connect with him on LinkedIn Bernice Boikanyo.  Subscribe to his YouTube Channel Bernice Boikanyo and visit his website www.boikanyomusic.com 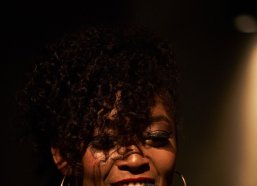 Charlette a vocalist with a husky voice 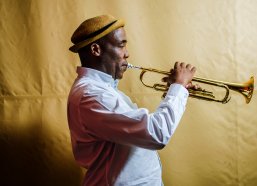 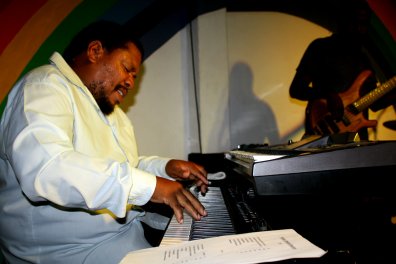 Mthobisi to spellbound his fans at UKZN Jazz Centre