When Mimi Mtshali went to the studio to record her album Your Love last year, little did she know that almost a year later she would be a recipient of the best female jazz award at the inaugural Mzantsi Jazz Awards. “It came as a complete surprise.  I did not expect this.  Not at all”, she told Marabi Jazz Lounge.

The first surprise she had was when her husband and pianist Mduduzi Mtshali who produced the album brought American saxophonist Kirk Whalum to the studio and was featured in the title track of the album. Mduduzi worked with Pius Mokgokong as an executive producer.  The presence of Whalum brought a lot of excitement not only to Mimi but to other musicians that were part of the recording.

Mimi was born and raised in Vosloorus in a family that is likes music. She is the only girl with two brothers.  This young mother to Lihle and Maisha is passionate about God, life and her family.  Like most musicians, she sang in the choir and has strong background in Gospel.  This comes as no surprise as she does her jazz version of a popular gospel song “Joko e a hao”.  She and her husband studied music at the University of Cape Town.

Other artists that she worked with in the album include Sydney Mavundla on trumpet, Mozambican Moreira Chonguica on vocals, Tlale Makhene on percussion, Frank Paco on drums, Raymond Green on guitar, Mduduzi Mtshali on piano and many others.  When this album was recorded, Mimi was expecting her second child.  She said she enjoys working with husband in the studio and on stage. When asked how does she strikes a balance between the roles of mother and musician she said, “It was not easy at the beginning but I finally got to manage.

When I play a role of wife and mother I focus on that and when I am on stage I focus on being an artist”.  She also works as a music tutor at Wits University where she says she always encourages young students to focus on their music career in order to succeed.

Winning the best female jazz award does not mean that Mimi is planning to slow down.  Her next project is Life In Music Show which celebrates some of the prominent musicians in South Africa.  “This show also has an unplugged session where I get to learn songs by other musicians, sing and play with them”, beaming with smile.  The project is in collaboration with Ritevac online TV show in partnership with Yamaha.

She strongly believes that the future of jazz in South Africa is very bright. As she put, “Musicians are often misunderstood because they are different personalities which is always reflected in the music they record and perform.  They are creative artists who must be free to express themselves through their art”.

Despite being a UCT graduate, Mimi still wants to study further in music, improve herself as a vocalist and reach many audiences as an international artist.  To preserve the talent of jazz musicians in the country, she believes that through education, the young musicians get encouraged to take their craft seriously, a point also emphasised by Mduduzi. There is a need for more books about the lives of South African jazz icons.

The Mtshali’s also like to give back to the community.  They are both co-founders of Iyakha Institute of Arts and Culture Academy which is based in Kwa Themba teaching kids from the tender age of six to adults on how to sing and play instruments which could always influence their career choices when they finish school in years to come.

Mimi is scheduled to perform live at Winnie’s Soul & Jazz Restaurant on the 16 of September. 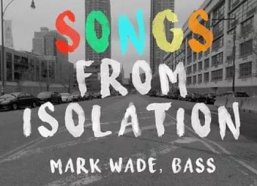 Lockdown exposes another creative side of Mark Wade 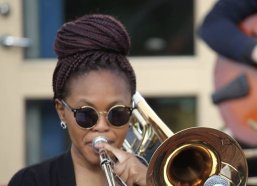 Siya chose an instrument not played by many women

Youth is actively involved in jazz