Zoe Molelekwa was only 6 years old when his pianist father Moses Molelekwa and mother Florence Mtoba died on 13 February 2001.  The incident shocked many people not only in jazz fraternity but the entire arts and entertainment industry.  Jazz lovers still expected more performances and albums from the young genius pianist whose albums Finding One’s Self is rated among the best jazz albums by a South African artist.

Sixteen years later, grandson of James Mtoba an actor and musician who played the role of Sarafina’s uncle in the movie “Sarafina!” and Jerry Molelekwa, nicknamed the Monk and the son of a man popularly known as Taiwa is a student at the University of KwaZulu – Natal (UKZN).  Now 23 years old, he is studying music at the UKZN School of Music and is specialising in the very same instrument that his father excelled in playing.

Durban is very hot and the suburb of Glenwood which is home to many restaurants is busy with hungry patrons struggling to find parking so that they can have their favourite meals at lunch hour.  Zoe Molelekwa has chosen the Habesha Café as a quiet place to talk to Marabi Jazz Lounge.  “Some of these restaurants and coffee shops can be very noisy”, he says.

Inside the café, there are designers and artists working on their laptops, chatting and probably discussing upcoming projects.  Molelekwa is already sipping Ethiopian coffee with a book on his lap.  “Parking can be a nightmare around this time of the day. I decided to walk because I live not too far from here”, looking relieved with the choice he made.

When asked about his fondest memories of his father – he fondly remembers watching him on his piano at home practicing and outside in the garden practicing Tai Chi.  “He was a huge Bruce Lee fan and we loved watching martial arts movies.  Our favourite song as father and son was Buffalo Soldier by Bob Marley”, recalling his childhood years.

Because his father was an artist, there were times where he would not see him because of his hectic schedule.  “I don’t remember being in a studio with him but I saw a lot of his live performances at Bassline, Kippies and Moreleta Park and many more”.  He added “Some of our generation of musicians won’t really know what it was like being around those venues because some have since moved or closed”.

Despite the piano being the main focus of his studies, he has studied other instruments.  He was only 4 years old when he first played but felt he was ‘very small’ then.  “My father tried teaching me, and we had one lesson on the major scale, my fingers weren’t ready and I was impatient. I had too much energy and I loved the drums, the rhythmic aspect of it and how you can use your whole body to release energy, then I started school and studied the recorder, got a diploma then moved onto the violin, viola, and then alto saxophone before quitting all at once. I had auditioned for the Drakensberg Boys choir school at the time, accompanied by my uncle, but even though I was offered a scholarship, my uncle wasn’t happy with me ending school at the 10th grade, so I didn’t go.” telling Marabi Jazz Lounge.

His grandfather Jerry Molelekwa is presently running the Moses Molelekwa Arts Foundation.  “At home there was a piano and I always used the instrument to vent out whatever I was feeling or going through at the time while I was growing up.”  After completing matric, he worked at Exclusive Books in Sandton City while deciding on the career path to follow. “While I was in High School, we had a IsiZulu teacher, Sandile Sithole, who was also Night Staff Manager at Exclusive Books Sandton City, a writer and a painter, and he always had such interesting books on his shelf in class. Long story cut short, he saved my life. I always loved reading and spending time in the library, and I wasn’t 100% sure what I wanted, so I saw it as an opportunity to prepare myself for whatever it was I wanted to get into in life and artistically. He was like a big brother and mentor, may his soul rest in peace…I even wrote him a song called ’Sandile’s Meditation’.”

Some of the older relatives advised him to embark on what they believed were ‘safe’ careers.  It was legendary pianist Themba Mkhize who played the role of a mentor to Zoe, giving him piano lessons.  “He was very supportive”, he adds.  Molelekwa also met other great pianists Nduduzo Makhathini and Afrika Mkhize in the process.

Asked whether being compared to his late father is putting a certain amount of pressure to do well if not better, he smiled and said “I look at pressure and comparison as a motivation”.  He told Marabi Jazz Lounge he has experienced a lot of that.

When asked whether he will strictly stick to jazz and not work with musicians from other genres which is what Benjamin Jephta did in his second album entitled The Evolution of An Identified, he is quick to admit that he grew up listening to kwaito, house and hip-hop besides jazz.  He listens to different types of music.  “The music I make is very reflective on the human experience, my experiences and the experiences of those around me.

Jazz is our freedom. House and Kwaito make us feel good and dance. Mbaqanga, UMngqokolo, SeTswana, Pedi, Sotho and Ndebele traditional music and many more other ‘Genres’ that we have here at home are aural cultural artefacts, all embracing pride in our culture, the harmonies, rhythms, the way we dress, the ceremonies, it’s all there, all that music, the way we relate to it, we’re telling stories of where we come from. Music is the soundtrack, it is all those stories, the days you remember living through, the times you had to run, the times you danced and the times you cried alone.

Each song is like a day in the life of you and me, we wake up, either to continue striving to get there, or we just can’t take getting knocked down any longer… my music will be there to push you, and sometimes give you moments to ponder on, but you can always be better if you want to and take the good from it. I’m not too worried about sticking to Jazz and all. I’m more concerned about how this music and the fruits of it can bring new life to the societies we are brought up in, really assess what we give and take from each other, how we treat one another.

I don’t want to just be going on tour playing music, recording and selling records. Playing definitely brings joy, but I would also like to work with various organizations that strive for change. Ultimately It will be an experience, a New Life Experience, an exhibition of life using sound, oration and visuals, telling stories of where we’re from and engage in coming up with solutions…”

He says this generation of jazz musicians should endeavour to diversify and collaborate with different artists, organizations and brands.  Digital marketers must also come with ways to make jazz look hip.  Creative ideas must not be restricted.  Zoe has been involved in a few productions but not planning to release an album anytime soon.  “I just want to focus on doing the groundwork for now but there are many interesting things coming in the new year, the birth of New Life and Zoe and the New Life…”, he concluded. 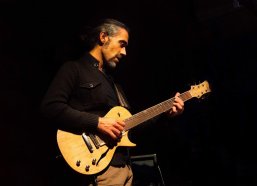 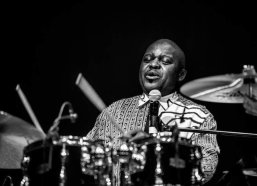 0 thoughts on “Molelekwa follows on his father’s musical steps”