Nina is versatile and not afraid of challenges

The list of musicians she has worked with is long and impressive.  Bheki Mseleku, Feya Faku, Lu Dlamini, Hugh Masekela, Ray Phiri, Gito Baloi, and Busi Mhlongo are just some of the artists Nina Mkhize has worked with in her music career.  Born in Umlazi, Durban on 13 February 1980, she started singing at weddings and church to the applause of the elders who had no idea they were watching a future musician.

At high school, she and her friends would imitate their favourite musicians.  “I guess this is where the seed was planted”, she told Marabi Jazz Lounge.  This she did with the full support of her mother.  She took a gap year after completing high school, contemplating which career to embark on.  By the end of that year, her mind was made up that that she was going to enroll for a music qualification the following year.

She enrolled at the Natal Technikon where she studied Light Music, which was part of Jazz Studies.  Before her enrolment at the technikon, she received her first formal training through a programmed called MusicActive, which was hosted by the University of Durban Westville in partnership with car manufacturer Volkswagen while at high school. “I knew that I was going to be a musician”, the very outspoken Nina said.

Her first break as a professional musician was working with Busi Mhlongo and touring with Bheki Mseleku. “I was featured in the album Indiza by Busi Mhlongo as a backing vocalist”, she told Marabi Jazz Lounge.  She also became the vocalist for the Standard Bank Youth Jazz Band under the leadership of Barney Rachabane.  “Working with different musicians exposed me to the world of arts I had always been longing for.  They gave me lots of support which inspired by confidence”, with a broad smile.

Nina also plays the piano, which helps her when composing songs.  “Most of the songs I perform are my own compositions.”  She describes her music as African with element of jazz.   Her music is influenced by mainly by Busi Mhlongo, her mentor Bheki Mseleku, Joe Zawinul, Herbie Hancock, Dianne Reeves, Salif Keita, Letta Mbulu, and Nancy Wilson.  “Growing up as a child, I listened to jazz, gospel, blues, pop, soul and classical”.  She is very comfortable with being described as a versatile musician who is not afraid of challenges.

Despite being well known as a musician, Nina has done some film work.  She was part of a stage production called It’s Cooking in the Melting Pot, contributed to the soundtracks of Izulu Lami, The Sky in Her Eyes and several documentaries.  Nina will also be seen in the movie Love Lives Here which will soon hit the cinemas.  Recently, she made a brief appearance in the SABC 1 drama Uzalo where she played the role of a lawyer for Pastor Mdletshe, played by veteran actor Glen Gabela.

She currently works for Urban Lime as the Senior Leasing Manager. Nina is also an entrepreneur.  Neenah Enterprises is a company she owns as well as Neenah Funeral Services.  Despite her hectic schedule, she always makes time for her family. “I also love meditating”, she said. “I sometimes teach the youngsters how to sing”, something she thoroughly enjoys.  Young musicians of today are future stars that need to be nurtured.

When chatting to young musicians, she is always forthright about the music industry.  “It’s a tough industry.  Academic training is essential.  Musicians must also work on their craft.  Constant practice is important.  Lastly, learn the business side of the industry”, she told Marabi Jazz Lounge.  She believes that minor setbacks are only meant to make one very strong, focused and determined. 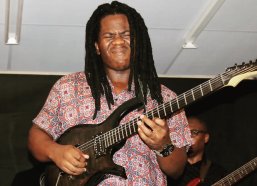 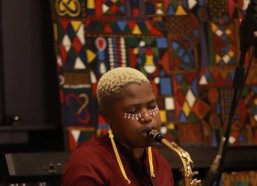 Jazz is a form of healing according to Ziwe

Kgethi introduces himself through playing the trombone

0 thoughts on “Nina is versatile and not afraid of challenges”